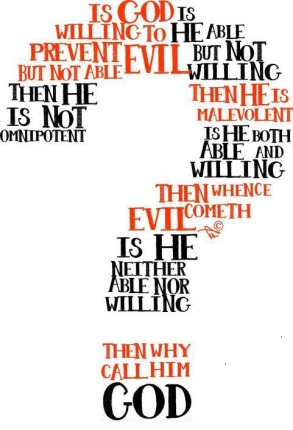 As J. S. Feinberg explains, “The problem of evil is a problem of both theological and philosophical interest as well as a matter of religious import, [which] not only arises in Western religion and philosophy, but also in various other world religions.”[1] Millard Erickson asserts, “The most difficult challenge to the Christian faith is the problem of how there can be evil in the world, [because] if God is all-powerful and all-loving, how can evil be present in the world?”[2] David Hume takes the nature and presence of evil a step further when he wrote, “Is he willing to prevent evil, but not able? Then is he impotent. Is he able, but not willing? Then he is malevolent. Is he both able and willing: whence then is evil?”[3] Erickson further explains, “[While] the problem of evil will never be fully resolved within this earthly life, there are biblical teachings that help alleviate it.”[4] Erickson then offers several themes that account for the sin and fall of the human race (Genesis 3) and the sinfulness of each human, but Erickson also includes the incarnation of the Second Person of the Triune God, who became a sacrificial atonement for human sin, and made a way for eternal life beyond death.[5] Upon this premise Erickson offers the following themes as helps in dealing with the problem of evil: (1) Evil as a Necessary Accompaniment of the Creation of Humanity, (2) A Reevaluation of What Constitutes Good and Evil, (3) Evil in General as the Result of Sin in General, (4) Specific Evil as the Result of Specific Sins, (5) God as the Victim of Evil, and (6) The Life Hereafter.[6]

Of these themes, this writer believes it is important to first understand, as Feinberg illustrates, “There is no such thing as the problem of evil, for there are many problems of evil including the religious problem, the philosophical/theological problem, and also the degrees, intensities, and gratuitousness of evil.”[7] Erickson then properly illustrates, “The problem of evil must be thought of as a conflict involving three concepts: God’s power, God’s goodness, and the presence of evil in the world.”[8] Of the various themes offered, evil as a necessary accompaniment of the creation of humanity establishes God cannot do anything that violates His divine nature or moral attributes, so it was and is human’s free will to choose that made and makes evil a necessary consequence to choices. A reevaluation of what constitutes good and evil stipulates one must consider the divine dimension to God’s superior knowledge and wisdom, the dimension of time or duration, and the question of the extent of the evil. Paul’s letter to the Romans said, “I consider that our present sufferings are not worth comparing with the glory that will be revealed in us.” Ultimately, an eternal glory outweighs any momentary troubles and each person will have a different perspective, based upon past experience and beliefs. Evil in general as the result of sin in general asserts the entire race has sinned and is now sinful. Erickson raises an important question in regards to this theodicy: “If humans were created good, or at least without any evil nature, made in the image of God, and if the creation God had made was ‘very good’ (Genesis 1:31), then how could sin have occurred?”[9] This leads one to believe sin had to be caught or be infected by. However, Erickson clarifies, “For humans to be genuinely free, there has to be an option. The choice is to obey or to disobey God. In the case of Adam and Eve, the tree of the knowledge of good and evil symbolized that choice.” This affirms God did not create sin; He merely allowed humans the freedom to choose. Specific evil as the result of specific sin deals with reaping and sowing and violations of God’s law leading to consequences. The main focus of this theory revolves around the “why”. For example, why do bad things happen to good people and vice versa? Every action has a cause-and-effect relationship, and in some cases people get what is deserved, but in others like the blind man in John 9:2-3, no specific sin on his part or his family’s had caused his blindness.

The final two theories seem to provide the best explanation when dealing with the problem of evil. Erickson shows, God as the victim of evil demonstrates, “The Triune God knew that the Second Person would come to earth and be subject to numerous evils, [including His death, but] He did this in order to negate sin and thus its evil effects.”[10] This one act, by itself, shows the love of God, as Christ ultimately became the victim of all evils in the world. Lastly, the life hereafter establishes there will a great time of judgment when every sin will be recognized and the godly will also be revealed. Erickson further illustrates, “Punishment for evil will be justly administered, and the final dimension of eternal life will be granted to all who have responded to God’s loving offer.”[11] Sin, in essence is choosing to ignore God’s will and for anyone who chooses not to accept this gift of forgiveness and everlasting life, C.S. Lewis illustrates, “Throughout life, a person who says to God, in effect, ‘Leave me alone’ [in the end will get his or her wish.] Hell is the absence of God, and is God’s simply giving that person at last what he or she has always asked for. It is not God, but one’s own choice that sends a person to hell.”[12]