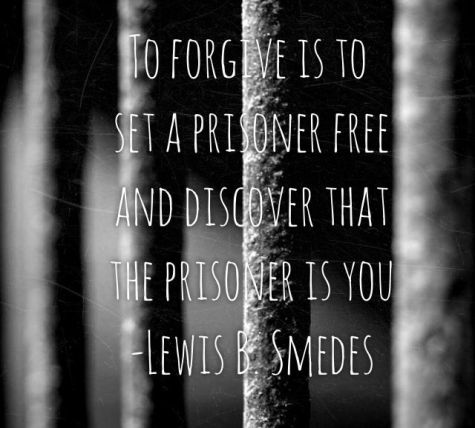 Yesterday’s sermon was a sobering reminder that our unforgiveness towards others actually hinders God from forgiving our own sin and from answering our prayers. If that is not proper motivation; I do not know what is! Sometimes we must forgive others, ourselves, and even God in some cases.

The core problem with unforgiveness is the longer you hold onto it, the harder it is to let go. And this only gets worse with time, as the unforgiveness creates a stronghold in the individual’s life, which continually spreads like cancer and permeates all areas of thought and being. I once heard harboring unforgiveness being described as, “drinking poison and expecting the other person to die.” This way of living is so unhealthy, especially considering that forgiveness is a decision, not an emotion.

As long as we harbor unforgiveness against someone, that person will always have power over us, so I implore any readers to release yourself from the prison of unforgiveness. It may sound counter to our way of thinking, especially to believe that we are prisoners of our own choosing, but perhaps this story will be a better illustration of being a prisoner of one’s own choosing:

In Thomas Costain’s history, The Three Edwards, he described the life of Raynald III, a fourteenth-century duke in what is now Belgium. Grossly overweight, Raynald was commonly called by his Latin nickname, Crassus, which means “fat.”

After a violent quarrel, Raynald’s younger brother Edward led a successful revolt against him. Edward captured Raynald but did not kill him. Instead, he built a room around Raynald in the Nieuwkerk castle and promised him he could regain his title and property as soon as he was able to leave the room.

This would not have been difficult for most people since the room had several windows and a door of near-normal size, and none was locked nor barred. The problem was Raynald’s size. To regain his freedom, all he needed to do was lose weight. But Edward knew his older brother, and each day he sent a variety of delicious foods to entice him. So, instead of dieting his way out of prison, Raynald only grew fatter.

And when Duke Edward was accused of cruelty, he had a ready answer: “My brother is not a prisoner. He may leave when he so wills.” Raynald stayed in that room for ten years and wasn’t released until after Edward died in battle. But by then his health was so ruined that he died within a year … a prisoner of his own appetite.

Hear me now: Unforgiveness is the cell we construct around ourselves, which not only cuts us off from the world we are so supposed to be transformed by, but it also hinders our union and fellowship with God. Remember, forgiveness begins with refusing to play God and moves us towards releasing people from any personal judgment. It does not condone any action committed and it certainly does not mean forgetting any offense, because that in turn would mean not learning from the past. Instead, forgiveness is the act of surrendering judgment to God, which then allows you to live a joy-filled-life, one full of freedom, love, mercy, and grace!

Forgiveness transforms anger and hurt into healing and peace. Forgiveness can help you overcome feelings of depression, anxiety, and rage, as well as personal and relational conflicts. It is about making the conscious decision to let go of any grudge.