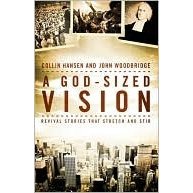 Collin Hansen is an American journalist and editor of The Gospel Coalition. He received his undergrad from Northwestern in history and journalism and his Master of Divinity from Trinity Evangelical. Hansen is also considered to be an expert on New Calvinism, which is a movement within conservative Evangelicalism. It ultimately seeks to combine the fundamentals of sixteenth century Calvinism with present-day culture.[1] John Woodbridge received his BA from Wheaton College, his MA from Michigan State, his Master of Divinity from Trinity Evangelical, and his Doctorat de Troisieme Cycle from the Universite de Toulouse, France. Woodbridge serves as research professor of church history and the history of Christian thought at Trinity Evangelical and specializes in evangelicalism, fundamentalism, origins of higher criticism, the French enlightenment, the French Huguenots, and history of the Bible’s authority.[2]

Hansen and Woodbridge first set out to demonstrate since few people alive today have ever experienced the true power of revival, there exists a disconnect between what is prayed for and what God is capable of doing through a God-sized vision. Revivals have served many purposes in the history of the church, many of which have led to renewal of faith and the outpouring of God’s Spirit. Secondly, Hansen and Woodbridge demonstrate repentance and prayer are the common denominators and the beginnings to every revival. Prayer is what takes the finite hopes and dreams of mankind and places them in the infinite realm of God’s supernatural omnipotence. Repentance prepares and cleanses the heart, allowing God it to be filled until it overflows with love, mercy, and grace for the people who need to feel the same supernatural presence and encounter with God.  Thirdly, Hansen and Woodbridge demonstrate the necessity of having a God-sized vision, which focuses on the supreme will of God and specifically what He wants to do in and through the church. For example, Charles Finney believed, “Christians have waited for God to move, when all along God has gifted the church with everything it needs to spark revival… Finney deployed ‘new measures’ [like the] anxious seat, which became a staple of American evangelism leading to practices such as the altar call.”[3] Lastly, Hansen and Woodbridge highlight multiple revivals, to plant the seed of faith in the reader’s mind, and to demonstrate God is capable of much more than man can ever dream of.

Collin Hansen and John Woodbridge illustrate, “Though God alone can instigate revival, the church need not wait idly… When Christians petition God for revival, they acknowledge that all their efforts to organize and contextualize go for naught unless God goes before them.”[4] Prayer is vital in the individual believer’s life, but also in the corporate setting. Without targeted prayer the Welsh Revival of 1904 and 1905 may have never happened. Evan Roberts was a direct result of prayer by Seth Johnson who prayed God would rise up a young man to lead the church in revival. Robert’s vision was to see one hundred thousand souls saved, which is exactly how many were. Robert’s accomplishments were great, but he also had shortcomings. Hansen and Woodbridge explain, “Wales seems to have entirely forgotten its revival legacy [and is now] more immune to revival today because it has been inoculated with heavy doses of undiluted religious fervor.”[5] Lack of spiritual discipline played a major role is this diagnosis, as Hansen and Woodbridge illustrate the 1859 revival taught biblical doctrine while many of the converts in the 1904 revival instead sought mystical experiences.[6] Hansen and Woodbridge then demonstrate, “Without basic biblical formation, many caught up in the revival lacked the necessary tools for spiritual growth.”[7] This is a crucial principle in churches today as many Christians have turned into spiritual junkies, moving from one experience to the next. It is crucial to teach balance and biblical doctrine, especially as it relates to the outpouring of God’s Spirit. Hansen and Woodbridge further explain the importance of understanding church history as, “Revival is neither a well-organized evangelistic campaign nor a finely crafted apologetic treatise… Revival transcends all ordinary ways we comprehend and communicates the grace of Jesus Christ.”[8] As revivals continue to spread across the world, racism remains a sore spot in the history of the church, so repentance is a crucial area to emphasize. A. Derwin illustrates, “less than five percent of evangelical churches are multi-ethnic… [making the] evangelical church one of the most segregated people in America on Sunday morning. The lines of color must be crossed and perhaps one of the best examples is the Azusa Street Revival. This Pentecostalism was interracial and as Frank Bartleman noted, “The ‘color line’ was washed away in the blood of the Lamb.”[9] Ultimately, the future of the church rests solely on whether denominations and ministry leaders can set aside minor differences and unify one another by embracing the Great Commission[10] and the Great Commandment.[11] The church is purposely made up of many parts, and when those parts are working together, God will do mighty things as the world comes to know the love of Christ through the actions of His followers.

Bartleman, Frank. How Pentecost Came to Los Angeles: As It Was in the Beginning, in Witness to Pentecost: The Life of Frank Bartleman, ed. Donald W. Dayton. New York, NY: Garland, 1985.

Cairns, Earle E. An Endless Line of Splendor: Revivals and Their Leaders from the Great Awakening to the Present. Wheaton, IL: Tyndale, 1986.