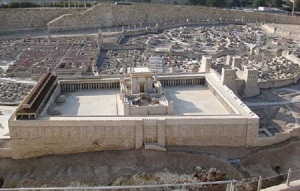 Ezekiel and the New Temple

Submitted to Dr. Joel Ajayi, in partial fulfillment
of the requirements for the completion of the course:

Ezekiel’s prophecy of the new Temple is one of scriptures most important prophetic texts to understand because of the assumptions that are made if improper hermeneutics are used. Ezekiel, during the twenty-fifth year of exile has a vision where God instructs him, “Son of man, look with your eyes and hear with your ears and pay attention to everything I am going to show you, for that is why you have been brought here. Tell the house of Israel everything you see.” It is through Ezekiel’s final vision that God begins a new work in the lives of those in exile. It provided hope, forgiveness, and restoration because during this second Exodus, the exilic community would undergo a spiritual transformation where God would write His word on their hearts and they would be His people again and He would be there God. Without question, the Bible is the inerrant word of God and all prophecies are one-hundred percent accurate, so the question surfaces: why did this prophecy fail to live up to its promises when the exiles were released and returned home and why does it still cause so much debate as to its interpretation? Part of the problem arises in determining whether the prophecy is foretelling or forth-telling, whether it was meant to be literal or figurative, and also whether there was a partial fulfillment and possibly a future fulfillment still to come. The one thing that can be agreed upon is that the “book of Ezekiel concludes on a glorious note, with a vision of Yahweh returning to his temple and establishing his residence in his city in the midst of his people.” Yet, as Randall Price illustrates, “it is necessary to evaluate the symbolic school’s interpretive theories and compare it with the literal school’s interpretation to determine whether the intended fulfillment is to be understood as timeless, having occurred in the past, or is reserved for the eschatological age.”

The first three chapters in Ezekiel 40-48 gives the reader a clear impression of a future literal Temple. Why else would he have received so many exact details concerning its dimensions, its parts, and what was to be housed inside? The next logical question to ask is why then did Zerubbabel’s construction of the new temple differ from Ezekiel’s specific instructions? Why did Ezra, Zechariah, and Nehemiah make no mention of the instructions? It may as Willem A. VanGemeren stated have had something to do with, “Ezekiel’s ministry not being crowned with success and the exiles preferring to listen to the blind optimism of the false prophets in chapter 13.” We read in Ezekiel 11:25 that he told all the exiles everything he saw in his visions, but when you factor in this vision came during their twenty-fifth year of exile, they still had forty-five more years before they would be allowed to return home. This vision of hope and restoration could easily have been discounted or possibly have led to grumbling and unbelief.

The first two-thirds of the Ezekiel are about sin and judgment and they contain so many metaphors, stories, and symbolism which makes taking the last third strictly literal problematic especially since this section refers to God’s grace and redemption. In addition, when reading chapter 20:49 it becomes evident that Ezekiel’s audience did not fully understand the literal meaning of his symbolic acts as he cries out to the Lord in frustration. In fact when you read chapter 24:19 following the death of Ezekiel’s wife, the reader is presented with the people asking what his symbolic acts literally meant for them. Since this action was not repeated in chapters 40-48, it can only mean they understood his vision to be taken literally. As Tremper Longman III and Raymond Dillard state, “since no such temple as Ezekiel 40-43 describes has ever been built, many who urge a literal reading of the Bible insist that Ezekiel is providing the blueprint and specifications for a future temple that modern Israel will build in Jerusalem.”

As the exiles were returning home with their covenant renewed and the Spirit of the Lord returning within them, one can almost picture Zion and Eden coming back together, but the prophecy fell short of the exiles expectations. The terrain was not changed, there was no universal peace among their neighbors, the tribes were not resettled, the land did not undergo the changes which were prophesied, there was no messianic reign, so it is this writer’s belief those events are still to come during the Millennial reign of Christ. In addition, the Temple represented the presence of God and I can find no evidence that His presence ever entered the new Temple. Instead as Longman and Dillard state, “God’s glory only came into the second Temple when Jesus entered Jerusalem. In addition, as you read Ezekiel chapter 10 as the Glory of the Lord leaves the Temple because of the people’s iniquities and idolatry we are presented with the Spirit’s complete return in Ezekiel chapter 43 entering in the exact opposite way of how the Spirit departed. As Price states, “this reverse progression was obviously intended to convey the sense that what had been lost was being restored.”

The very fact there are sixty-five references in the New Testament from Ezekiel make it a very important book and viewing this prophecy of the new Temple through the lens of the New Testament has some parallels as well as contradictions. In Ezekiel 47 we are presented with this river of life and the healing and restoration of the land and then in John 4:10 Jesus identifies Himself as this same source of life-giving water during His encounter with the Samaritan woman at the well. The biggest anomaly occurs between Ezekiel’s vision and the vision John had on Patmos in Revelation 21:3. Both saw this wonderful new heavens and earth and the city of God but in John’s vision there was no temple because Jesus was the sacrificial lamb who was slain to cover a multitude of sins which made the need for a temple and sacrificial altar unnecessary. Dr. Gary Yates elaborates further by stating, “the Book of Revelation clarifies that there will not be a temple in the New Jerusalem because God and the Lamb will be the temple in that eternal city (Rev 21:22).”

When Adam and Eve rebelled against God in the Garden of Eden a separation occurred between God and His children because of God’s holiness. As Yates illustrates, “… the Bible focuses on God’s attempt to redeem fallen humanity, and the New Jerusalem will ultimately restore what was lost at Eden.” Atonement of sin, since God’s first covenant, has required the shedding of blood through a sacrificial system. However, when Jesus was crucified He did away with the need of sacrifices for Christians, as Paul teaches us in 1 Corinthians 5:7. Christ became our Passover and He also pointed to Himself as the sacrifice for our sin. Jesus gave His body and shed His blood, as the final sin offering for all people for all eternity. “For by one offering He has perfected for all time those who are sanctified.” Given this information and the vast number of passages that speak of a literal Millennial Temple: (Joel 3:18, Isaiah 2:3, 60:13, Daniel 9:24, and Haggai 2:7, 9) and the passages that speak of sacrifices in that temple: (Isaiah 56:6-7, 60:7, Jeremiah 33:18, and Zechariah 14:16-21) I can only assume there will be a need for sacrifices following the rapture or at some point during the tribulation. God promised Zadok as well as his descendants, the Levites that they would have an everlasting priesthood and states they are the only ones who may draw near to the LORD to minister before Him in Ezekiel 40:46 and 44:15. An interesting question presents itself here: were anyone’s sins forgiven through the blood sacrifices in the temple after Jesus was crucified and raised from the dead?

God also promised a Davidic descendant would forever reign on the throne. Christ was that promise and to believers He represents the replacement for the need of a Temple because as a follower of Christ, God’s presence is already inside each believer. In Matthew 1:23 we are presented with Immanuel: “God with us” and then in chapter 12:8 we read the Son of Man is Lord of the Sabbath, essentially meaning Jesus represented the Temple and was Lord over it. The Temple was a place of worship, but it was also a place of sacrifice for individual sins and for the sins of the nation. When Jesus came on the scene the Temple had been transformed into a den of thieves and robbers. Jesus came to provide a way for people to regain their communion with God by being able to give forgiveness of sins: past, present, and future. During the trial of Jesus, He said He would destroy the Temple and rebuild it in three days. Those holding the trial had no idea He was speaking of Himself and as Yates points out made, “Jesus was…the intermediary between heaven and earth.”

While this writer believes the need of literal sacrifices are no longer needed presently that does not mean they may not be required in the future. God would much rather have obedience than sacrifice, but there will come a time much like it did for the Israelites when the Glory of God leaves the Temple, and then this era will be presented with a choice and every knee will bow and every tongue will confess to God. Preston Sprinkle elaborates further by saying, “The entire Bible testifies to Yahweh’s sovereign rule over creation. The book of Ezekiel begins and ends with this affirmation.”

This study has really opened my eyes to the importance of studying each prophecy in light of the New Testament. Since the Bible is without error and since all prophecy must be true, the aim in interpreting them correctly requires insight into whether they were partially fulfilled and may point to a more literal fulfillment in the future. It also makes you look at each vision or oracle in the proper context to make sure you completely understand who the text was written for and why. The more you can understand the times, the more you can unravel any mysteries or metaphors, figurative language, and symbolic acts. When approaching these topics of Biblical prophecy in the future, I will slow down and take a step back before jumping to conclusions and will insist the same for those I am teaching.
This assignment has also made me think forward about the end times. Having just returned from Israel, I was amazed that there are already plans underway for the rebuilding of the Temple and many of the artifacts to be present were already constructed or commissioned. The Temple Mount is a highly disputed place between Muslims and Jews, but it is also a place most Jews would never venture because many believe the Ark of the Covenant is buried beneath it. Trying to picture a Temple that would span the size of Jerusalem is monumental, but when you read that it will become a place for the whole world to worship, it would have to be! As Sprinkle puts it best, “Judgment is never God’s final word: grace is!”

There are always dangers to the extremes of interpretation, just as there is danger to just believing whatever someone tells you to believe. Jesus came to testify to the truth and that should always be the goal in interpreting the word of God. We must also remember that God is continually trying to redeem all of humanity and by reading, by understanding, and by teaching His word and His promises is our best chance to achieve our Great Commission.