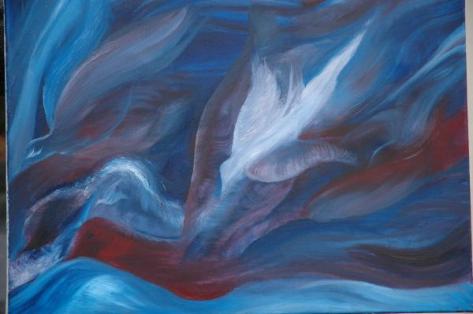 So now there is no condemnation for those who belong to Christ Jesus. And because you belong to him, the power of the life-giving Spirit has freed you from the power of sin that leads to death. The Law of Moses was unable to save us because of the weakness of our sinful nature. So God did what the law could not do. He sent his own Son in a body like the bodies we sinners have. And in that body God declared an end to sin’s control over us by giving his Son as a sacrifice for our sins. He did this so that the just requirement of the law would be fully satisfied for us, who no longer follow our sinful nature but instead follow the Spirit. Those who are dominated by the sinful nature think about sinful things, but those who are controlled by the Holy Spirit think about things that please the Spirit. So letting your sinful nature control your mind leads to death. But letting the Spirit control your mind leads to life and peace. For the sinful nature is always hostile to God. It never did obey God’s laws, and it never will. That’s why those who are still under the control of their sinful nature can never please God.

For this assignment, I have chosen to conduct a study on the word “Spirit.” According to Chadwick Thornhill, “The first and most efficient step in examining the Greek text is to use an interlinear New Testament… [To] display the Greek text along with a rough English translation.” Doing so, revealed this Greek rendering:

From the Greek text, this passage roughly translates as:

In this passage, “Spirit” is used five times, making this a key-term and it takes on two similar forms:

[In addition,] some of the Hebrew equivalent words are:

In this passage James Strong illustrates how:

Here Paul began to elaborate the difference between “flesh” and “Spirit.” This distinction is difficult to grasp because both terms have more than one meaning. To “walk according to the flesh” (v. 4) means to carry out in conduct what the human nature desires. To “be according to the flesh” (v. 5) means to allow the human nature to dominate one’s life. To “be in the flesh” (v. 8) is to be unregenerate, to be devoid of the Spirit. The “Spirit” seems from the context to refer to the Holy Spirit rather than to the regenerated spirit of man. Those who prefer the second view tend to describe man as having two natures, an old sinful one and a new one that would be the same as this regenerated human spirit (cf. Gal. 5:16-17). In favor of the former view, the chapter began with a clear reference to the Holy Spirit (v. 2). Other following references to “spirit” (Gr. pneuma) would therefore normally be to the same Spirit. Furthermore, it is reasonable that in identifying the basis for Christian victory Paul would point to the ultimate source, the Holy Spirit, rather than to a secondary agent, our human spirit.

Once the meaning of a word is known, Thornhill suggests understanding how the word relates to the words it is surrounded by, since words on their own have little meaning without context. This is why establishing the semantic domain is such a critical step. Upon completion of this task, Thornhill suggests then using a concordance to see how the word is used in other places of scripture. Consulting Strong’s Concordance, revealed this additional information for the word “Spirit” and its use in three hundred and eighty-five other passages of scripture:

1) The third person of the triune God, the Holy Spirit, coequal, coeternal with the Father and the Son 1a) sometimes referred to in a way which emphasizes his personality and character (the \\Holy\\ Spirit) 1b) sometimes referred to in a way which emphasizes his work and power (the Spirit of \\Truth\\) 1c) never referred to as a depersonalized force 2) the spirit, i.e. the vital principal by which the body is animated 2a) the rational spirit, the power by which the human being feels, thinks, decides 2b) the soul 3) a spirit, i.e. a simple essence, devoid of all or at least all grosser matter, and possessed of the power of knowing, desiring, deciding, and acting 3a) a life giving spirit 3b) a human soul that has left the body 3c) a spirit higher than man but lower than God, i.e. an angel 3c1) used of demons, or evil spirits, who were conceived as inhabiting the bodies of men 3c2) the spiritual nature of Christ, higher than the highest angels and equal to God, the divine nature of Christ 4) the disposition or influence which fills and governs the soul of any one 4a) the efficient source of any power, affection, emotion, desire, etc. 5) a movement of air (a gentle blast) 5a) of the wind, hence the wind itself 5b) breath of nostrils or mouth.

I found this word study so informative and the time I spent researching different forms of the word, as well as, different places in the Bible it is used in has given me a new lens to view scripture through. I also found parsing the word to be invaluable as you begin to understand how a word is related to the words around it. After completing all of Thornhill’s and Blomberg’s steps, I consulted a commentary to see how I did and surprisingly, I was not far off from the intended meaning. I love the picture Douglas Moo paints in his description of Paul’s letter:

Paul continues to use this opposition between flesh and Spirit to expand on the life that is given to believers in and through God’s Spirit. He begins by asserting again the unbreakable connection between Spirit and life on the one hand and flesh and death on the other (vv. 5-8). His purpose here is more on the negative side, as he elaborates particularly on the “weakness of the flesh” (v. 3a; cf. 7:14-25). In the concluding verses of this section, however, Paul reminds his readers that the life-giving power of God’s Spirit is finally effective only in those who continue to let the Spirit change their lives. The antithesis between flesh and Spirit stated in v. 4b in terms of “walking according to” is pursued in vv. 5-9 with several different expressions: v. 5a: “being according to the flesh/according to the Spirit,” v. 5b: “thinking the things of the flesh/of the Spirit,” v. 6: “the mind of the flesh/Spirit,” vv. 8-9: “being in the flesh/in the Spirit. To begin at the end of the sequence: what Paul says in vv. 8-9 makes clear that the contrast between “being in the flesh” and “being in the Spirit” is a contrast between non-Christian and Christian.

Another use of the word “Spirit” that was interesting was the continued use to mean wind, breath, or breath of life in other passages of scripture. R. Laird Harris describes how:

The Hebrew word 2991a ‏רוּחַ‎ (rûaḥ) wind, spirit was, “Used also in Hebrew [And] that the expression “Holy Spirit” is only used twice in the OT: Psalm 51:11 [H 15]; Isaiah 63:10. The terminology changed from Spirit of the Lord to Holy Spirit (used also in the DSS) during the Intertestamental period, perhaps partly to avoid the use of the sacred name. The use in Daniel, “Spirit of the holy gods,” perhaps contributed to the eventual usage.

Something Thornhill did not cover, but Blomberg did was establishing the importance of what word to study by illustrating, “Any word that seems somewhat confusing to the contemporary reader is good fodder for a word study… [And] any words that are theologically significant or on which the entire meaning of the passage seems to rest are also important. Overall, Blomberg takes a similar approach with Thornhill in his steps to conduct a word study, emphasizing, “When trying to access the meaning of a particular word, the interpreter needs first to determine it lexical form… This structure is helpful not only for seeing the possible range of meaning for a word, but also for seeing how the word occurs in context, which proves crucial.” Once the meaning of a word has been established, Blomberg stresses the importance of going deeper in your study, “That establishes the word’s range of meaning. [Here,] Blomberg notes a word will almost certainly not mean something that is has never meant before.” This principle is similar to biblical exegesis as something cannot mean something today that was not intended for the original audience, so a proper understanding of the history and cultural setting is crucial in both word study and exegetical work.

When in doubt about word usage, Stanley Toussaint suggests, “If a word encountered in the New Testament has one primary meaning in the rest of the Greek language and a different primary meaning in the LXX, the interpreter should give priority to the LXX.” Also, Blomberg adds, “If the word’s meaning seems consistent in the underlying Hebrew, the LXX, and classical Greek, there is a good chance that the New Testament will reflect the same meaning.” The final step Blomberg advises is synchronic analysis, which involves looking at other New Testament writings, which contain the specific word you are researching.

Blomberg also cites several pitfalls to avoid, which include:

Failure to give the immediate literary context its proper preeminence when determining word meaning [because it] has the potential to derail even the most committed student of the New Testament. [Blomberg asserts] mistakes happen for two reasons: a legitimate definition from a word’s history in not appropriate to the context of the time period in which the text under study appears (anachronic fallacies) and an illegitimate definition is chosen and applied: (definitional fallacies)… [Blomberg also cites] the most common anachronistic fallacy in lexical analysis is to grant more interpretive weight to the etymology of a word than is appropriate.

In conclusion and after applying all the steps Thornhill and Blomberg suggest while also avoiding the common pitfalls, the word “Spirit” in Romans 8:1-8 is critical to understanding what Paul was trying to illustrate in his letter to the Romans, as Moo further illustrates:

More than anything, he was trying to the contrast between being “in the flesh” and “in the Spirit,” [essentially] a contrast between belonging to the old age of sin and death and belonging to the new age of righteousness and life. So characteristic of these respective “ages” or “realms” are flesh and Spirit that the person belonging to one or the other can be said to be “in” them. In this sense, then, no Christian can be “in the flesh”; and all Christians are, by definition, “in the Spirit.” We miss Paul’s intention if we think of being “in the flesh” here as the condition of mortality that continues to characterize even believers, or as the moral weakness and proneness to sin that, more lamentably, we still possess (Dunn). For the rest of the verse makes absolutely clear that (1) to be a Christian is to be indwelt by God’s Spirit; and (2) to be indwelt by God’s Spirit means to be “in the Spirit” and not “in the flesh.” Paul’s language is “positional”: he is depicting the believer’s status in Christ, secured for him or her at conversion.